So, it’s Cyber week and not only is EVERYTHING on SALE (neon blinking) for the holiday season but guess what? Our favorite streaming services got into the act. 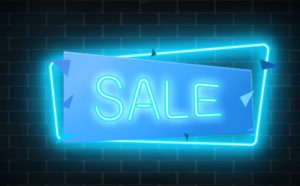 As if Disney+ didn’t get enough subscribers on day one, ten million, they put together a package with Hulu and ESPN+ to get more people to hop on board because a million plus new subscribers a day isn’t enough.

CBS All Access is giving you a month free and you can Sling for $15.00 a month.

Coupons sites have popped up with deals and codes just like if you were buying from Pier 1 and needed a coupon.

So, to all the naysayers out there that say TV is dead and no one is watching:

TV is one of the most popular mediums in the United States, reaching around 90 percent of adults per week. Audiences are able to choose from a plethora of programs, with latest figures suggesting there are over 1,700 TV stations in total. While adults are still spending a lot of time watching TV, the number of hours per day has decreased from 4.2 in 2014 to around 3.35 as of 2018. Young adults seem to spend significantly less time watching television than their older counterparts as alternative forms of entertainment have begun to greatly increase in popularity.

These falling viewership numbers don’t necessarily mean that people are watching less TV overall, just that they are beginning to turn away from traditional TV and move to subscription video on demand services such as Netflix. Consumers in the U.S. have been particularly quick to adopt new viewing technologies, but nevertheless, the number of TV households in the United States has continually increased over the last five years.

Now back  to the regular scheduled program…..

Small But Mighty! Have You Been Airdropped?