AirDrop is a file-sharing feature on Apple devices that lets users send photos, videos, contacts, links, and other content via Bluetooth and Wi-Fi. Phones with AirDrop turned on can send files to another person from up to 30 feet away and it doesn’t matter if you are in another person’s contact list or not.

While many iPhone users use AirDrop to simply share a file with a friend, some teens are using it for another purpose. A not necessarily new trend called “Airdropping”. If you’ve ever been in a public area that a large group of teens have entered, then begun receiving numerous silly memes and photos from oddly named iPhones around you, you may have been airdropped.

Teens will change the names of their phones to something vague so it’s not distinguishable who they are, then enter a fairly busy area usually with several other friends and begin sending large amounts of image/memes to anyone with their AirDrop activated. Sometimes the goal is to just get a funny reaction from the recipient, other times they are trying to crash another person’s phone by sending a mass amount of files in seconds.

Most times “airdropping” is harmless, just sending silly images to anonymously get a reaction from others. But of course, there are some who abuse it. AirDrop has also been used to share answers to tests in the classroom, send unflattering pictures of someone to an entire room of people or make fun of others without the subject of the jokes knowing it. 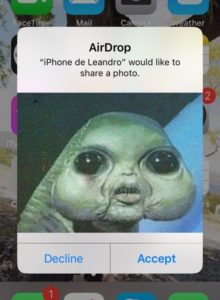 Some teens believe that sending images through AirDrop is better than social media accounts because you don’t need to have a person’s username or phone number to share and its quicker than sending a group text or DM. The downside to AirDrop is no one is monitoring it for abusive/illicit content and since it’s automatically included on every iPhone it can easily be used as a tool for abuse.

Is this just a trend that will come and go or will this become an evolution of social media? A platform for sharing with just those in a close vicinity to you at any given time.