How a Tweet Led to a Sold-Out Chicken Sandwich

If you have been on social media lately, you have probably heard of the current ‘Chicken Sandwich War.’ It all started when Popeyes Louisiana Kitchen released their first chicken sandwich in August 2019. Their biggest competitor, Chick-fil-a, took a slight jab at the release of Popeyes chicken sandwich by tweeting: 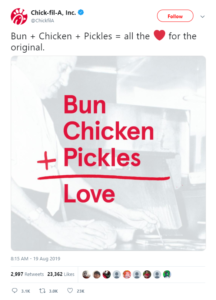 Popeyes social media team then responded within 15 minutes with the perfect response: “…y’all good?” Popeyes witty response caused a frenzy between customers, thus creating the viral debate ‘Chicken Sandwich War,’ which led to Popeyes chicken sandwich being sold out within two weeks of its launch and led to record sales.

This can be a lesson to all marketers: never underestimate the power of a tweet. When done correctly, social media can be a huge asset to a brands image. This ‘Chicken Sandwich War’ is just one example, but many big brands have utilized how having banter on social media channels can gain more attraction than simply selling a product.

CTR – The Over Rated Metric Small But Mighty!