How LeBron is Inspiring Change

LeBron James has entered the media game! He and his business partner (childhood friend), Maverick Carter have secured $100 million in investments for their media company, SpringHill Entertainment. Their goal?  To empower black audiences.

Certainly, this isn’t the first media company with this goal, but forming a company with this goal given all that is going on in America currently is certainly newsworthy and admirable. SpringHill Entertainment gets its name from the Ohio apartment complex that LeBron James grew up in. The SpringHill team, according to LeBron is “comprised of more than 100 employees, 64% people of color and 40% female in an industry that averages 25%”. 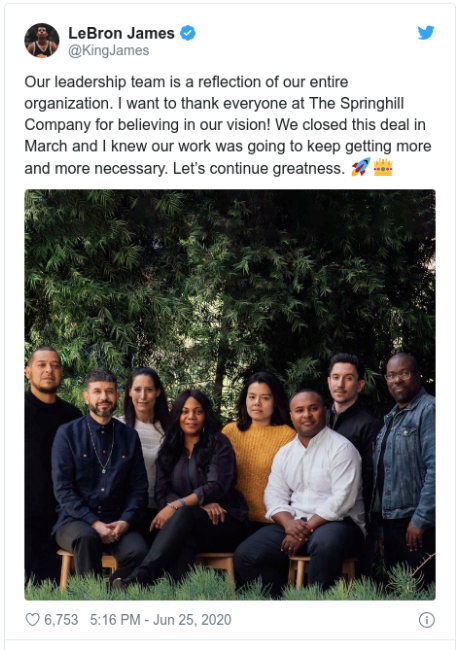 Hearing this quote reminded me of one of my favorite pieces of media content. It was a 1994 MTV interview with the late, great Rapper/Actor Tupac Shakur. Speaking on the need for change in America regarding poverty, hunger and equality, Tupac said this…

“All my life I grew up around black people, poor people but I can’t live around poor people now because they’ll rob me. And why would they rob me?  Because they’re starving, there’s no money there. But they’re telling me now that I’ve made some money, I need to move here (away from poor people). It’s like no one is ever trying to deal with this section, they’re just moving away from it. We’ll have more stars coming from the ghetto, but they’ll all move away. All society is doing is leeching off the ghetto.

They use the ghetto for their pain, their sorrow, their culture, for their music, for their movies. I don’t want to be 50 years old at a BET We Shall Overcome Achievement Awards. Not me. I want when they see me, they know it’s for us to go farther…. ain’t that what we’re supposed to do?

You can watch an excerpt from the interview here.

I can’t help but think that SpringHill Entertainment is exactly what Tupac was talking about. LeBron and Maverick Carter using their business as an example to spark the brains of those who are watching them. Especially young people of the same race who are living where they came from, Spring Hill Apartments.

SpringHill’s most notable project to date is the movie “Space Jam. A New Legacy” which is scheduled to be released in the Summer of 2021. The movie is of course a sequel to the original Space Jam starring Michael Jordan. Space Jam will star LeBron James as the central character and will be produced by Ryan Coogler who previously directed the blockbuster Marvel movie, Black Panther.

SpringHill certainly has more media initiatives on their agenda and there are plenty of other articles on the internet where you can read more. My purpose in writing this post wasn’t so much to highlight all of its new projects, but rather for it to serve as a reminder to all of us to do our job, spark the brains of those watching us and to inspire change.