What did you do for summer vacation?

I can’t believe it is almost back to school time again, summer just flew by! Pretty soon the networks will roll out their fall launch and be back into the full swing of “must see tv” and all the live sports they can manage. The network’s sales teams are salivating to get back to normal. It’s like bringing back the Pumpkin Spice Latte. Summer is over and once again summer tv viewing gets a bad rep for its reruns and what is generally called fluff programming. Ad Age (8/15/19) reported:

With six weeks to go before the 2019-20 season gets underway, the median age of the broadcast primetime audience is 58.7 years old, TV usage among adults 18-24 is down 17 percent and the Big 4 networks are averaging a 0.5 C3 rating in the 18-49 demo. In July, fewer than 795,000 members of the dollar demo watched the commercials on NBC each night, and the Peacock was the highest-rated network during the month! Currency deliveries were down 19 percent last month, which means that the promos for this fall’s new and returning series reached one-fifth as many demographically desirable viewers as they did in the same period one year ago. 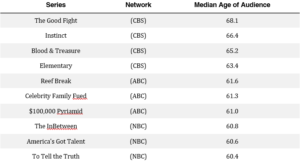 Adding to the viewership burden, CBS and Direct TV and their subsidiaries had a three-week dispute locking out 401,409 A 18+ in the Detroit DMA which is about 12% of viewers. CBS gets knocked as the old people network but what marketers tend to forget (as we lust after the proverbially millennial) is that Boomers hold 70% of the wealth in the United States and account for 42% of all consumer spending. So, we should be embracing the fact that we have new programming in the summer that people tune into and stop writing it off as three months of fluff plus the Summer Olympics every 2 years. We should embrace the consumer spender that tunes into to these programs week after week instead of shutting them out and targeting the attention span that is only :06 long.

The Time to Hire a Media Buying Agency is Now